This article is originally from Crain’s Cleveland Business, written by Lee Chilcote for March 14, 2020.

Cleveland-based architecture and interior design firm Vocon Inc. recently shipped 15 virtual-reality headsets to San Francisco so a client company could preview its new office. Within minutes of opening the packages, employees were able to don the headsets and get a realistic tour of their soon-to-be-built office space. That gave them a chance to raise questions and concerns for the company’s change management team before they even moved into the space.

This is just one example of how extended reality or XR — a term that groups together virtual reality, augmented reality and mixed reality under a single banner — is quickly becoming a mainstream tool architects can use to foster a collaborative design process. Using this new technology, customers can get a realistic sense of what their spaces will look and feel like before a shovel ever hits the dirt, potentially saving time and money over the long term.

“To be competitive in the marketplace, if you do not have some sort of lab or team exploring these options, you’re missing an opportunity to engage with the client,” said Brandon Dorsey, technology director at Vocon. “Clients are asking questions about this early on.”

When Vocon, which also has offices in Los Angeles and New York, dramatically renovated and expanded its offices on Prospect Avenue in Midtown a few years ago, following a flood that caused damage, the 180-person company placed its XR technology in a centrally located first-floor room.

Previously, the firm’s virtual-reality technology had been tucked away in a crowded back conference room. Today, it’s a key space where clients are brought for tours or meetings.

“It’s an executive briefing room that’s designed around allowing the client to collaborate with us, and VR is a tool that’s in that room,” Dorsey said. “It’s a selling point.”

XR has become more mainstream in architecture recently, in part because the technology has improved so quickly. Cloud computing now allows much faster processing speeds, and the software that architects use for design today is already embedded with XR technology.

“It’s already part of the workflow with the click of a button,” Dorsey said.

The days when users were tethered to a cord and only experienced low-resolution graphics are gone. Today’s XR systems produce high-resolution images and are typically wireless. They also allow for multiple users, and architects can make changes in real time to gauge clients’ reactions. Haptic technology or 3D touch even adds sensory details to the user experience.

With XR taking off, it’s become a must-have for architectural firms, especially those like Vocon that have a national and international client base. “It’s time and money that we’re seeing a big ROI on,” Dorsey said.

He cited two examples that illustrate how XR can save a client time and money. In the past, where they sometimes ordered multiple versions of furniture just to see how they looked in the completed space, now they can eliminate those extra costs by viewing options ahead of time using XR. The technology can also give clients a realistic feel for the difference between, say, an 8-foot and a 9-foot ceiling, allowing them to avoid potentially costly change orders after construction starts.

“Typically, you wouldn’t hear about that till afterwards, and then you’d have a retrofit change order to deal with,” Dorsey said. “Now, we’re taking care of it earlier through virtual reality.”

Collaboration is another benefit. “Better hardware allows a multi-user VR experience,” Dorsey said. “It allows all of the users to come together and actually be in the same space together and walk around together.”

Finally, the technology gives clients and firms greater ability to plan and meet with one another remotely, rather than having to travel frequently for face-to-face meetings, something that could become increasingly useful as the coronavirus spreads and upends travel plans.

Although XR isn’t cheap — systems like Vocon’s can cost many tens of thousands of dollars — the tech is a necessity. “It’s becoming part of an investment you have to make, just like you’d make an investment in a new PC, a better monitor or a new cellphone,” Dorsey said.

By selling clients on the fact that XR can help them avoid costly last- minute changes, architects can build some costs into their proposals, increasing the firm’s ability to recoup its investment. Dorsey heads up a three-member research-and-development team that explores how Vocon can use new technologies to serve clients, advance its practice and grow the business.

The company offers regular lunch-and-learn training in order to bring employees up to speed. “If you’re going to invest in R&D, then you have to be willing to invest in training; otherwise the tools won’t get adopted and they won’t get used,” Dorsey said. “You have to invest equally in both ends.”

In the end, XR technology can be a net benefit for architects and their clients, he said. “Historically, the design process had a low number, but change orders had a heavy cost associated with them because of all the things that were not caught early on in the design process,” he noted. “Now, we’re flipping it digitally, and spending more time up front to prevent changes later.” 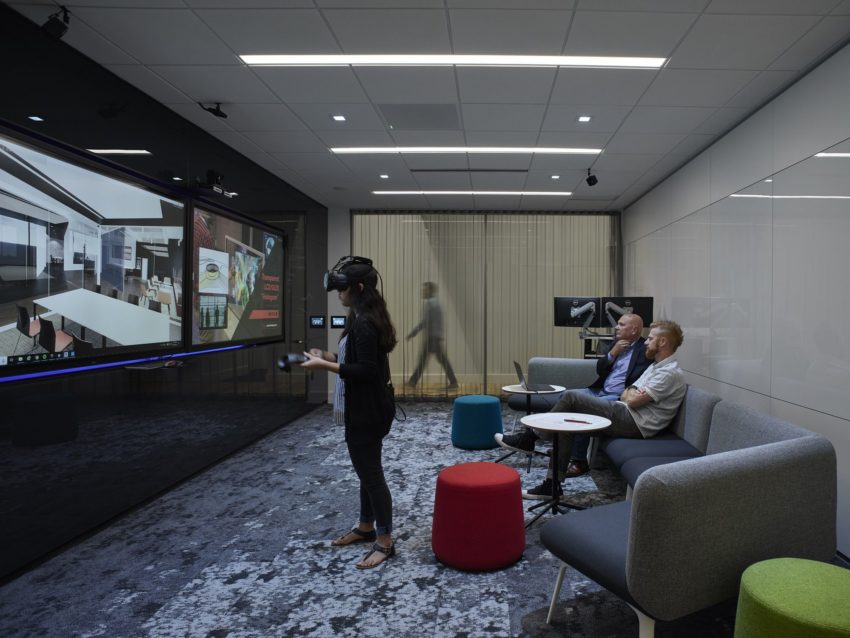