Productivity Drops as Work From Home Fatigue Sets In, Survey of Employers Finds

This article is originally from Commercial Observer, written by Nicholas Rizzi on September 16, 2020.

Nearly six months into the forced large-scale work-from-home experiment that the coronavirus pandemic caused, companies have started to report a drop in productivity as remote work fatigue starts to set in, a survey by architect and design firm Vocon found.

Vocon surveyed the heads of nearly 50 businesses around the country and found that 40 percent of them have started to see decreases in productivity as staff work remotely. Meanwhile, a quarter of them added their employees were feeling exhausted working from home every day. That runs counter to what the leaders told Vocon early on in the pandemic, when 56 percent of them in April rated productivity as “excellent.”

“That was a really big indicator for us that things were starting to fracture,” said Megan Spinos, the director of strategy for Vocon. “What we’re seeing in the comments is that there were other implications. Companies were having a really hard time keeping their culture together and a really, really difficult time onboarding employees. The workplace was really a critical place for them.”

Businesses surveyed in the study employ a combined 443,895 people in industries that include technology, legal services, advertising and the finance, insurance and real estate sector.

Respondents told Vocon that sitting in front of a computer in the same spot of their home — often on video chat — every day was “draining” while they missed being able to connect face-to-face with colleagues and had trouble setting boundaries for when work started or ended, Spinos said. Those issues tended to be worse for people who do not have a dedicated workspace in their homes.

Some business owners polled by Vocon said that while workers have started to trickle back into the office, the majority weren’t planning to return until the first quarter of next year. Business heads were also considering decreasing their workspaces in the future, but everybody still planned on having a physical space.

“Companies were taking actions to bring people back to their workspaces,” Spinos said. “We really didn’t have anyone that was saying ‘We’re still remote now and that’s the way it’s going to be.’“

While some companies like Morgan Stanley and MasterCard made waves early on when they announced plans to potentially shrink their office portfolio, others have gone all-in on physical workspaces recently.

Meanwhile, Facebook inked a 730,000-square-foot deal at the Farley Post Office and TikTok signed a deal for 232,000 square feet at the Durst Organization’s One Five One.

“Tech companies still believe in physical spaces,” said Tom Vecchione, a principal at Vocon. “There’s a new awareness about wanting to be in a building working together.”

It’s not just tech companies eager to return to a physical workspace. Surveys have found that the vast majority of lawyers around the country want to go back to the office, and that millennials and Generation Z workers across all sectors can’t wait to go back.

And this week the Wall Street Journal reported that JPMorgan Chase, one of Wall Street’s largest employers, told its trading staff to come back to the office by Sept. 21.

While the office may be here to stay, the way it’s designed and functions will change because of the pandemic, and not just to mitigate health risks, Vecchione said.

Spinos added that companies are still figuring out the redesign of offices but said they’re looking at having fewer individual workspaces — since solo tasks can easily be done at home — in favor of more areas for collaboration.

“I’m seeing this need for a hybrid space that is able to support an individual but moreover to support group activity,” she said. “We’re seeing a lessening of the need of individual assigned spaces.”

Even if employers can’t wait to get their staff back to the office, remote work is here to stay. Vocon’s survey found that 44 percent of the business leaders polled plan to let half of their staff, or more, work from home two or more days a week in the future. And 27 percent of them said they’ll give employees the flexibility to choose when and where they work.

“They do see that as a critical offering for attraction and retention of key talent,” Spinos said. “This has become mainstream in some shape or form.” 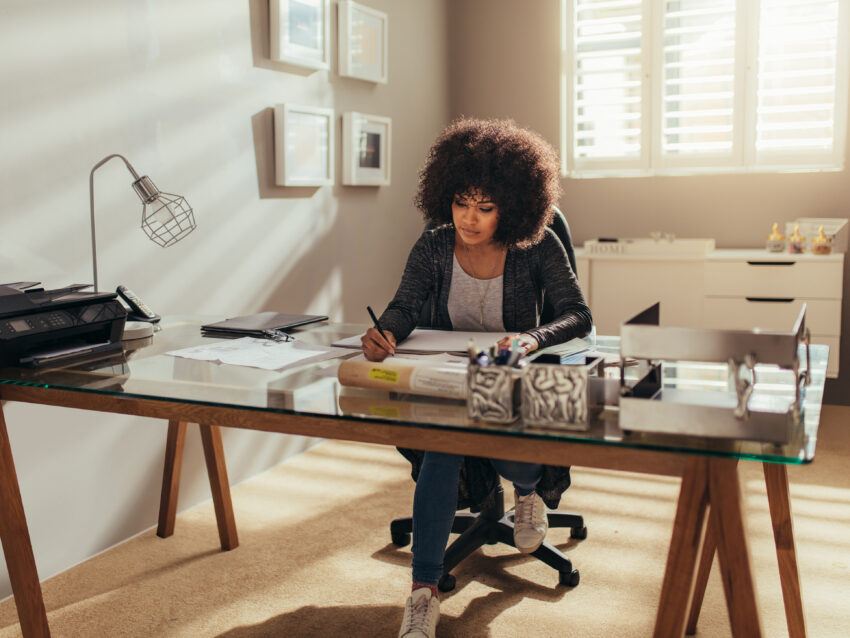